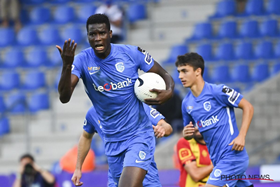 Allnigeriasoccer.com's catch-up on the Nigerian players who found the net for their respective clubs in matches across Europe on Sunday, September 20.
We begin in the Belgium First Division A. Defender Junior Pius scored twice to salvage a 2-2 draw for Antwerp against AS Eupen at the Bosuilstadion (Deurne).
With Antwerp two goals down, Pius netted his first goal in Belgian football in the 62nd minute before adding a second with 13 minutes left on the clock.
Still in Belgium, Paul Onuachu took his tally for the season to four goals in five matches with a brace for Racing Genk in their 3-1 win against Mechelen.
The lanky striker brought his team level ten minutes in and closed the scoring in the 68th minute.
In the French Ligue 1, Moses Simon opened his account for the season as Nantes fought back from two goals down to share the points with Saint-Etienne at the Stade de la Beaujoire - Louis Fonteneau.
The Nigeria international, in his fourth start of the new season, halved the deficit at minute 71.
Ifeanyi Emmanuel
Photo Credit : krcgenk.be
Copyright ANS