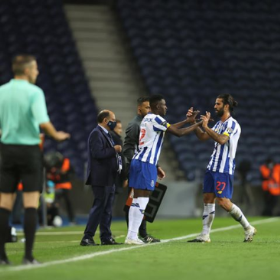 New Super Eagles invitee Zaidu Sanusi has revealed that he would like to play in the English Premier League at some point in his career but has stressed that he's happy to be a Porto player after joining the Portuguese champions in the ongoing transfer window.
The talented left-back has received a maiden call-up to the Nigeria squad for their upcoming matches against Ivory Coast and Tunisia having shown tremendous improvement over the course of last season while at Santa Clara.
Sanusi revealed that he shared a close bond with Chidozie Awaziem when he initially moved to Porto before the Super Eagles center back transferred to Boavista about three weeks ago.
"I'd like to play in the Premier League in future but I know it won't be easy, I don't have any favourite club there," Sanusi told allnigeriasoccer.com.

"I am very happy to be in Porto now because many Nigerians played in FC Porto before, last year they had Chidozie Awaziem.

"I met Awaziem, I like him, he is a good player. We talked about things, life, now I'm here alone in FC Porto.

"The team is very good, I like the players. "
He concluded by thanking Super Eagles fans for their words of encouragement following his call-up to the national team.
"I have seen so many Nigeria fans are commenting about me on social media. I am happy my dream has come true," added Sanusi.
Sanusi is one of seven uncapped players in the latest Super Eagles squad list, the others being Dele Alampasu, Mathew Yakubu, Chidera Ejuke, Cyriel Dessers, Samson Tijani and Frank Onyeka.
Ifeanyi Emmanuel
Copyright ANS