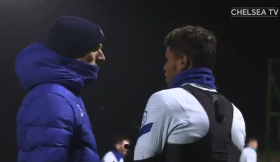 German football tactician Thomas Tuchel has been officially confirmed as the new Chelsea coach, a day after the dismissal of club legend Frank Lampard following a poor run of results.
Lampard lost five of his last eight Premier League games and even a win against Championship side Luton Town in the Emirates FA Cup on Sunday couldn't save him from being sacked.
The former Borussia Dortmund and Paris Saint-Germain coach has put pen to paper on an initial 18-month contract with the Blues, although there is a possibility of an extension.
He will be in the dugout for the Blues' Premier League clash against Wolverhampton Wanderers at Stamford Bridge on Wednesday evening.
Tuchel took charge of his first training session as Chelsea manager on Tuesday evening at Cobham and monitored at close quarters versatile Nigeria-eligible winger Faustino Anjorin.
In an exclusive video uploaded to Chelsea's official Twitter page (see photo above), Tuchel was spotted holding a private discussion with the England youth international during the workout.
Anjorin being invited to train with the first team after the axing of Lampard may suggest that he is in the plans of Tuchel in the short term at least.
The 19-year-old made four first-team appearances under Lampard including debuts in the Carabao Cup, Premier League, Champions League and FA Cup.
Ifeanyi Emmanuel
Photo Credit : chelseafc.com
Copyright ANS