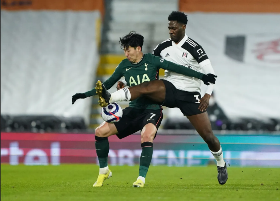 Fulham's five-match unbeaten came to an end on Thursday evening after they suffered a 1-0 loss at the hands of Jose Mourinho's Tottenham Hotspur at Craven Cottage.
Much of the pre-match talk centered around the world-class players in Spurs' ranks such as Harry Kane, Gareth Bale and Son Heung-Min but the goal conceded by Scott Parker's team was not scored by any of these players as Tosin Adarabioyo unfortunately put the ball into his own net in the nineteenth minute.
Dele Alli, making a rare Premier League start this season, thought he had scored after Son Heung-min drilled the ball across the six-yard box but replays showed that Adarabioyo got a touch on the ball as it went in.
The central defender was named in Fulham's starting XI along with Nigerian trio Ademola Lookman, Ola Aina and Josh Maja and they all put in a full shift.
The big talking point of the first half was the decision of referee David Coote not to award a penalty to Tottenham Hotspur and he was backed by the video assistant referee.
Super Eagles full back Aina appeared to have tripped Kane without making contact with the ball in the 35th minute.
Reacting to the incident at half-time, Liverpool hero Michael Owen is of the opinion that Tottenham Hotspur deserved a penalty but stressed that it wasn't a clear and obvious error by the on-field official.
"I think it's a penalty but once it's not given I totally agree with VAR shouldn't be then be going back and saying ...," Owen said on Premier League Productions.

"I don't think it's actually clear and obvious. Yes, Kane must be touched because he's not even looking at the defender so he wouldn't even know when the contact is coming.

"He's felt it, he's gone down and I do think it's a penalty.

"However, I think when the referee didn't make the decision I think it's absolutely right not to call it back because that's not clear and obvious."
Tottenham Hotspur were able to hold on to three points but Josh Maja saw his goal controversially chalked off in the 62nd minute after VAR confirmed a handball by Mario Lemina in the build-up to his goal.
Ifeanyi Emmanuel
Photo Credit : fulhamfc.com
Copyright ANS