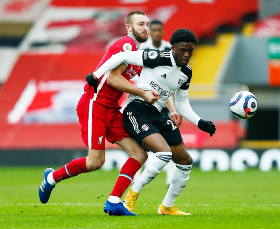 An outstanding afternoon's work saw Fulham secure the maximum points at Anfield, beating the champions Liverpool 1-0 thanks to Mario Lemina's first half winner.
Manager Scott Parker handed starts to four players of Nigerian descent namely defenders Tosin Adarabioyo and Ola Aina, winger Ademola Lookman and striker Josh Maja.
In the first part of the game, Liverpool didn't get going and were punished as a crisp finish into the bottom left corner gave the Cottagers a deserved lead in the 45th minute.
Maja came close to breaking the deadlock at minute four when he found space between Liverpool's center backs but skewed his effort wide and was presented with another chance again but his lob didn't come off.
The Bordeaux loanee was denied a golden opportunity to put Fulham ahead in the 28th minute as Liverpool goalkeeper Alisson flew off his line to block his attempted shot.
Speaking during halftime, former Liverpool midfielder Steven McManaman highlighted that Maja caused problems for the Liverpool defence, whose center back pairing was their nineteenth in all competitions this season.
McManaman said on Premier League Productions : "That area between Neco Williams and Nathaniel Phillips is causing them all kinds of problems.

"Josh Maja just doesn't get the desired connection but they have always looked to him, this hasn't just been in the last five minutes.

"They have utilized that space over there on that side of the pitch. Liverpool have made seven changes but have significantly weakened the starting lineup."
With ten games left to the end of the season, it's just goal difference keeping Fulham in the relegation zone; they have the same number of points as Brighton & Hove who are seventeenth in the table.
Ifeanyi Emmanuel
Photo Credit : fulhamfc.com
Copyright ANS