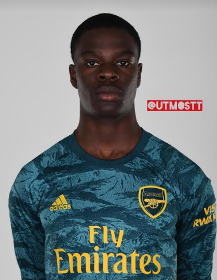 English Premier League club Arsenal are in advanced negotiations with Nigeria-eligible goalkeeper Ovie Ejeheri over a new contract.
Sky Sports says Ejeheri is on the brink of agreeing his first professional contract with the Gunners.
The 18-year-old began the season as backup to England U18 international goalkeeper Hubert Graczyk but has now established himself as a regular starter, going the distance in five of the last eight games in the U18 Premier League and was the club's preferred goalkeeper for the FA Youth Cup.
Ejeheri, who is in the final two months of his scholarship at Arsenal, could become the second player of Nigerian descent to commit his future to the north London club in the space of one month after Folarin Balogun, who inked a new multi-year contract in April.
Greenwich-born Ejeheri has spent roughly thirteen years at Arsenal, having joined the club at the age of five.
He was keen on representing Nigeria at the 2019 FIFA U17 World Cup but a medial meniscus injury put paid to his chances of getting a call-up to join a training camp in Abuja.
Ifeanyi Emmanuel
Copyright ANS