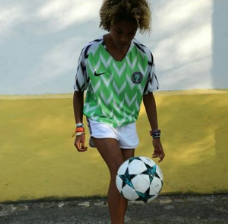 Allnigeriasoccer.com can exclusively report that Spanish-Nigerian teenager Victoria Lopez is attracting concrete interest from two Primera Iberdrola powerhouses in the summer transfer window.
Barcelona Femení and Atletico Madrid are exploring ways to sign the 2006-born center forward and have opened a line of communication with her camp over a deal.
Madrid CFF, Lopez's current club, are aware that bigger Spanish teams are sniffing around their prized jewel and moved fast to offer her a fresh three-year contract.
This season, Lopez has been scoring goals with reckless abandon, mustering an unbelievable 60 goals in seventeen matches for Madrid CFF youth team in the league, an average of 3.53 goals per game, two matches to the end of the season.
She is the leading scorer in the division ahead of Real Madrid's Camacho Carrilo Carla (29 goals, 9 matches),
CD Fútbol Femenino Olympia Las Rozas' Rodriguez Fernandez (25 goals, 15 matches) and Madrid CFF's Rodao Alonso Alba (25 goals, 16 games).
Lopez is only fourteen years old but is playing in the highest category of the youth league for female footballers and played with boys until last season, 2019-2020.
FA Women's Super League clubs are unlikely to be aware of the precocious talent because she has not made her competitive debut for Spain's youth teams.
Ifeanyi Emmanuel
Copyright ANS