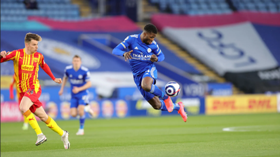 Leicester City have joined the race for Red Bull Salzburg's Zambia international striker Patson Daka.
The Football Association of Zambia (FAZ) have insider information about Daka's imminent departure from the Austrian champions, so much so that they revealed that he was left out of the roster for this month's friendlies against Senegal, Republic of Benin and Sudan to enable him sort out his club future.
It could end up being a bidding war for Daka as the prolific striker is also a target of Liverpool and European champion Chelsea in the summer transfer window.
The Daily Express is claiming that manager Brendan Rodgers is interested in signing the Zambian because he does not want to pin all his hopes on Kelechi Iheanacho in case his goals dry up, just as was the case before March 2021.
The newspaper has suggested that the Northern Irish football tactician views Daka as the long-term successor to Jamie Vardy, not Iheanacho, but the Red Bull Salzburg man would find it difficult breaking into the Foxes starting lineup straightaway due to the form of the Nigeria international.
Iheanacho has been tipped to remain at Leicester City next season having signed a contract extension two months ago.
The former Manchester City star was Leicester's top goalscorer in 2020-2021 with 19 in all competitions, two more than Vardy.
Ifeanyi Emmanuel
Photo Credit : lcfc.com
Copyright ANS