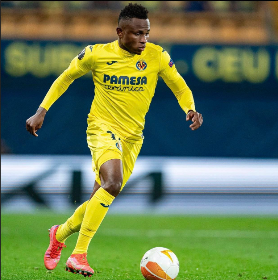 La Liga expert François Miguel Boudet was contacted by the French press to give the lowdown on Samuel Chukwueze amid audacious reports suggesting that he is wanted by Marseille in the summer transfer window.
If a deal were to happen, Marseille have to active the winger's release clause of 100 million euros - something that might not be feasible considering the effects of the coronavirus pandemic on the finances of European clubs.
Boudet sang the praises of Chukwueze and highlighted that he shone against Arsenal in the Europa League semifinal first leg back in April but added that he still has room for improvement.
The Diamond Academy product went through some difficult times last season, struggling with injury problems which saw him miss fourteen games in all competitions including the Europa League showpiece vs Manchester United.
"He's a very good player, he has a very good quality as a winger. Against Arsenal in the semi-final, he is excellent, we saw a winger with a lot of ball even if he can still be improved," Boudet said to Football Club de Marseille.
"He's very interesting, he's one of the revelations of La Liga two years ago. He is post trained at Villarreal, it is very surprising that the club wants to let him go."
Boudet  added : "He is able to play in the second point, he has the qualities even if it remains mainly a winger. He lacks the finish to perform consistently as a goalscorer.
"But, he's the kind of guy you like to see at the stadium, he's spectacular, with great speed and great dribbling quality."

Since making his La Liga debut against Levante in November 2018, Chukwueze has accumulated 91 matches in the top-flight, scoring 12 goals with 10 assists.
Igho Kingsley
Copyright ANS
All rights reserved. This material, and other digital content on this website, may not be reproduced, published, rewritten or redistributed in whole or in part without prior express written permission from allnigeriasoccer.com
Latest News