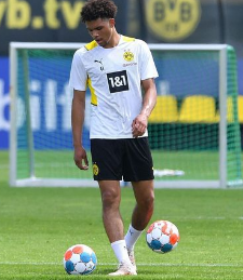 German Bundesliga giants Borussia Dortmund have started preparations for the 2021-2022 campaign.
New Borussia Dortmund coach Marco Rose has promoted very talented German-Nigerian center-back Nnamdi Collins to first-team training as he awaits his first-team players to link up with the squad after international commitments this summer.
The 2004-born Collins has been training with Borussia Dortmund's first team since Sunday, under the guidance of Rose and his assistants Alexander Zickler and Rene Maric as well as the athletics coach Patrick Eibenberger.
This is the second consecutive pre-season that Collins has rubbed shoulders with Dortmund's senior players, having traveled with the first team to Bad Ragaz for a pre-season training camp in August 2020.
The following month, he made his unofficial debut for Dortmund in a 2-1 win over Maduka Okoye's Sparta Rotterdam, coming off the bench for the last six minutes.
A central defender who is not shy to go forward, Collins provided two assists in three outings in the U19-Bundesliga West in 2020-2021 and scored four goals for the U17s the previous season.
Collins joined Borussia Dortmund in 2016 after a spell with hometown club Fortuna Düsseldorf.
Igho Kingsley
Photo Credit : instagram.com/nnamdi_pnc
Copyright ANS