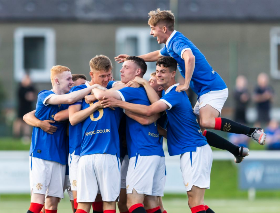 Former Arsenal wonderkid Malcolm Ebiowei made his league debut for Glasgow Rangers B on Tuesday night.
Ebiowei remained rooted to the bench for the entirety of Rangers B opening match of the Lowland League season against Bo'ness United on July 17.
He got his first taste of action in the Lowland League in Rangers first away fixture of the season against Spartans, playing the last ten minutes of a 2-0 win at Ainslie Park.
Rangers secured a well-earned win on the road thanks to goals from Robbie Ure and Cole McKinnon.
Ebiowei, 17, trained with the Golden Eaglets in Turkey and Abuja and was included in Nigeria's provisional squad for the 2019 U17 World Cup but was omitted from the final roster.
The attacking midfielder joined Rangers in February 2020 after he was surprisingly released by Arsenal.
A day after making his league debut, Ebiowei started for Rangers U18s as they hammered Dundee FC 5-1 at the Rangers Training Center.
Ifeanyi Emmanuel
Photo Credit : rangers.co.uk
Copyright ANS