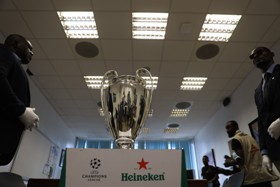 It was been a busy day for iconic footballer and UCL Ambassador Clarence Seedorf in the city of Abuja on Wednesday.
The former Real Madrid and AC Milan star is in Nigeria's capital city on the UEFA Champions League Trophy Tour presented by Heineken.

The tour which kicked off in Lagos yesterday has since moved to Abuja where the 46-year-old Dutch legend traveled around the city in the company of ex-Nigerian internationals, Jay-Jay Okocha and Daniel Amokachi.

The legend along with the UCL Trophy embarked on a city bus tour from Transcorp Hilton to the  Moshood Abiola National stadium in Abuja where he met with the Honourable Minister of Youth and Sports Development, Mr Sunday Dare.

From there, the 4-time UEFA Champions League winner proceeded to a fan meet and greet where he took pictures with fans alongside the UCL Trophy and signed a few memorabilia to the delight of the already excited football fans.

The excitement continued with a premium match viewing experience at the Transcorp Hilton, Abuja where fans gathered in large numbers to watch the Manchester City versus Atletico Madrid match.

Afrobeats stars Perruzi and Lojay were on hand to thrill the fans with half-time entertainment and an after-party to wrap up what was truly an eventful day.