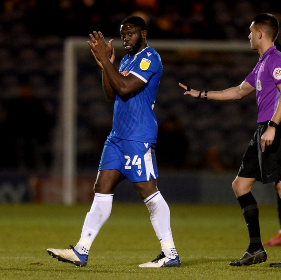 Through their official website, EFL League Two club Colchester United have announced their retained list following the conclusion of the 2021-2022 season, with decisions taken on three players of Nigerian descent.

One of the most popular Nigerian players in the Football League, John Akinde has been retained by the U's for next season.

Akinde has racked up 380 appearances in the Football League and has nearly one hundred goals to his name.

Former Manchester City youth teamer Camron Gbadebo has been released, less than six months after joining the club from the Premier League giants, and departs without making his senior debut.

Also moving on to pastures new is Bryan Ifeanyi, an 18-year-old right winger.

Ifeanyi spent time at Leyton Orient academy before he was snapped up by Colchester United in August 2021.