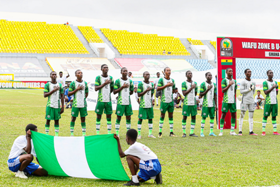 On Tuesday evening, Nigeria played against Cote d'Ivoire in a high octane 2022 WAFU U-17 Zone B Tournament semifinal match which ended in a 3-1 win for the Golden Eaglets at the Cape-Coast Stadium.

In a highly entertaining game, Emmanuel Micheal scored a brace before Abdullahi scored the third goal for Nduka Ugbade's team.

Allnigeriasoccer.com provides the player ratings for the youngsters.

Richard Odoh: Had very little to do except some routine saves. Was a calm presence between the sticks. 7/10

Yahaya Lawal: Left isolated in the first half against the Ivorian attackers and did well on a few occasions to repel them. Got much joy going forward and showed great technical abilities. Very good on the ball and got an assist after delivering a great cross for Abdullahi to finish. 7.5/10

Jeremiah Olaleke: Intelligent in his tackles. Great build-up play and brought the ball out of the defence well when passing avenues were cut off. Immense aerial prowess and was largely successful in his ground duels. 8/10

Miracle Ogwor: Shaky first half. Erratic passing and composure. Improved in the second half and made a great last-ditch tackle to deny the Ivorians what looked like a certain goal. 6.5/10

Micheal : Dead-ball specialist. A star in the making, he single handedly dragged his team and put them in the driving seat with two excellent free kick goals. Great attacking drive and willing to put everything on the pitch. Undisputed man of the match. 9.5/10

Raphael Oyebanjo: Broke up play intelligently but needs to learn to give away lesser fouls. Good on the ball and helped out the defence immensely. Good outing. 7/10

Ebube Okere: Didn't stamp his authority in the first half and the game largely passed him by. Improved massively in the second half and every good attack flowed through him. Missed a glorious scoring opportunity in the 83rd minute. 7/10

Basil Mbata: One word to describe this player? "Busy". Outstanding reading of the game to make so many interceptions. He hassled and made many recoveries which helped his team spring attacks and transitions. 8/10

Abubakar Abdullahi: A thorn in the Ivory coast flesh. Great header to put Nigeria 3-1 ahead from a great Lawal cross. 7.5/10

Jubril Azeez: Very unlike him to have such a quiet performance. Was kept at bay in the first half and didn't do much before he was substituted in the second half. Average. 5/10

Precious Williams: Switched places with Abdullahi in the second half to get on the ball regularly which he did. Helped out in defence very well and played well as an outlet. Wasn't decisive in the danger zones like he used to be. 7/10

Light Eke: Not his usual sparkling substitute performance. Made needless fouls and was rightly booked for a clumsy tackle in the 82nd minute. Got some easy passes and ball control wrong. Not a good outing for the forward. 4/10

Abubakar: Replaced Abdullahi and almost made an instant impact firing wide on the near-post when the far-post was gaping. Full of running and eager to make an impression. 5/10.