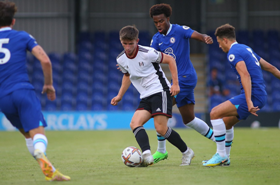 Super Eagles-eligible midfielder Carney Chukwuemeka played his first competitive match since his arrival at Chelsea as their development squad suffered a 3-0 defeat at the hands of Fulham in a Premier League 2 fixture at Kingsmeadow on Monday night.

Chelsea completed the signing of the Austrian-born England U19 international of Nigerian descent on a six-year deal eleven days ago.

Chukwuemeka was not named in Chelsea's squad for their opening match of the Premier League against Everton on August 6 and missed the second match in a row as the Blues were held to a 2-2 draw by Tottenham Hotspur on Sunday.

Against Fulham, Chelsea U21s coach made seven changes to the side that thrashed Wolverhampton Wanderers, one of which saw Chukwuemeka come into the side.

Luke Harris was the star of the show with three goals to help the visitors secure three points.

The talented Wales U19 international pounced on a defensive error and slotted home to give Fulham the lead midway through the first half, his low drive doubled the advantage in the 40th minute and sealed his hat-trick in the 69th minute.

Idris Odutayo and Bulgaria youth teamer of Nigerian descent Sylvester Jasper were both named in Fulham's starting lineup with the former going the distance.