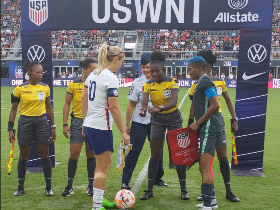 Nigeria's women football national team, Super Falcons, at the Audi Field in Washington DC  on Wednesday morning lost 2-1 to the USA in the second of their friendlies against the Americans reports All Nigeria Soccer.

Randy Waldrum's team had been walloped 4-0 by the same USA team on Saturday evening in the first leg of their USA tour.

The hosts threatened to grab their first goal as early as the 6th minute but the Nigerian defence was resolute.

With 10 minutes played, it was the Falcons that were close to breaking the deadlock but Ifeoma Onumonu was denied by the American backline.

The Falcons had been able to hold their more illustrious hosts at bay but unfortunately Blessing Demehin conceded an own goal in the 25th minute to hand The Stars and Stripes the lead.

Falcons first choice keeper Chiamaka Nnadozie despite the conceded goal in the first half gave a good account of herself as always to ensure that the Africans do not go down rather embarrassingly.

Half time substitute Uchenna Kanu restored parity for the Nigerians in the 50th minute when her curling effort off an assist from Glory Ogbonna at the edge of the box left the USA keeper stranded.

Rasheedat Ajibade delivered a great cross into the American box but that soon culminated into a counter attack for the USA side albeit her final ball was disappointing.

A raucous round of applause greeted the entrance of inspirational Meghan Rapinoe and it did not take long before her pact was felt.

In the 66th minute, Rapinoe found Rose Lavelle whose brave header saw the ball bobble past a hitherto well positioned Chiamaka Nnadozie who this time was badly exposed.

Both sides had their moments afterwards to punish the carelessness of their rivals but it ended 2-1 in favour of the United States.