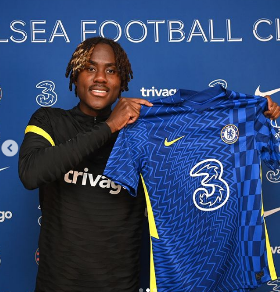 African-born defender Trevoh Chalobah is being linked with a departure from Chelsea in the January transfer window.

Italian transfer market guru Fabrizio Romano claims that the Freetown native is dissatisfied with his lack of first team opportunities at Stamford Bridge and could leave Chelsea if nothing changes.

Since the start of the 2022-2023 campaign, Chalobah has managed only one appearance for the Blues from a possible eight in all competitions.

The center back went the distance against Leicester City and was an unused substitute in six matches against Everton, Tottenham Hotspur, Leeds United, West Ham United, Dinamo Zagreb and Red Bull Salzburg.

Romano revealed that RB Leipzig, Inter Milan and AC Milan were interested in Chalobah's signature in the summer but Chelsea decided to retain him in their ranks.

Jose Mourinho's AS Roma have also been credited with an interest in the 23-year-old, who has been capped by England at U16, U17, U19, U20 and U21 levels but remains eligible to represent his country of birth Sierra Leone.

Chalobah joined Chelsea at U9 level and his current contract runs out at the end of the 2025-2026 season.