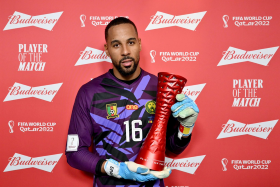 Cameroon defeated the number one ranked nation in the world, Brazil but crashed out of the 2022 World Cup on Friday night.

Switzerland's 3-2 win over Serbia in the other group game meant the Indomitable Lions finished third with four points, two less than the European side and table toppers Brazil.

Cameroon captain Vincent Aboubakar led by example, netting the winning goal in the second minute of stoppage time when he headed the ball into the bottom corner but was then sent off for a second bookable offense after pulling his shirt as he celebrated his goal.

Goalkeeper Devis Epassy put in a man of the match display, preventing Gabriel Martinelli from opening the scoring in the 15th minute when he tipped his header over the bar and just before halftime he produced another save to deny the Arsenal winger.

In second half stoppage time, Epassy easily saved a header from Guimaraes to preserve Cameroon's lead.

Epassy was supposed to play second fiddle to Andre Onana in Qatar but rose up the pecking order after the Inter Milan goalkeeper was sent home before the clash against Serbia for disciplinary reasons.

Three-time World Cupper Austin Okocha, who was on punditry duty for SuperSport, praised Epassy for the role he played in the win by Cameroon.

Okocha said : "He's going home as a hero, made a very good fantastic save here. It was all about his positioning, he made it look easy because he was in the right position and they've managed to follow up as well and pushed that one over."

Born in Soisy-sous-Montmorency, France, Epassy plays his football in Saudi Arabia nowadays and made his international debut in a friendly against Nigeria in June 2021.

"It shows how we build teams up and how we build players up. What a game to make your debut against a tough opposition," Okocha added.

Defeats for Ghana and Cameroon on Friday means only two African teams Senegal and Morocco made it to the round of 16 of the 2022 World Cup.