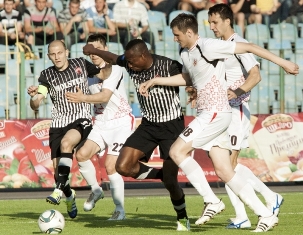 According to Hasan Egilmez, Oluranti has impressed coach Mircea Lucescu in the training matches he's featured in and is likely to be offered a contract by Miners.

'' After doing so well in the first division last season for FC Stal Alchevsk, Oluranti is ripe to play for any of the big teams in Europe. His phenomenal performance was noticed by Shakhtar who promptly invited him for tests,'' Egilmez told allnigeriasoccer.com.

He went further: '' Oluranti has been testing with Shakhtar since Wednesday. He played an excellent test game against FC Karpaty Lviv . So many clubs are jostling for his signature. But he wants Shakhtar because he is used to the Ukrainian League and can further develop there. We hope to sign a contract soon if we can agree financial terms with the club.''

James Ade Oluranti, regarded as one of the most talented youngsters from the stable of 36 Lions Academy, has drawn comparisons with Inter Milan whiz - kid Joel Obi. He is a complete midfielder, and has great vision and technique.