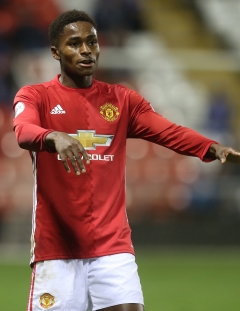 Manager Jose Mourinho was amazed by the progress made by the right wing-back in the 2016-2017 season, with the Portuguese gaffer naming him in the provisional rosters for Premier League matches against Tottenham Hotspur and Arsenal.

The 19-year-old Olosunde also trained with the first team ahead of their Europa League clash with Celta Vigo last month.

''I'm very happy with how the season has gone," Olosunde told ManUtd.com.

"Just travelling with the first team was a big thing for me. It's a lot different when you are actually with them. You just think 'wow'!'

"They're all friendly and talk to you to try to help you out. I was training with them for a bit and it was a great experience. I really enjoyed it.

''I would have loved to be involved in the matchday squad but it's good knowing, eventually, I could get my chance and I will just need to take it."

Olosunde's wonder strike against Real Salt Lake in the Dallas Cup was nominated for Manchester United Goal of the Month for April 2017.