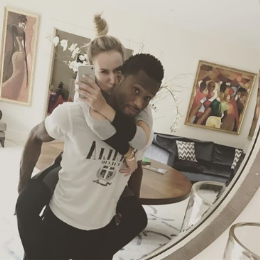 John Obi Mikel has recently revealed that the only time his Russian girlfriend, Olga Dyachenko, paid the restaurant bill was after the Super Eagles crashed out of the 2018 World Cup.
The Chelsea legend was downcast in the wake of the Super Eagles 2-1 defeat to Argentina and Olga rewarded him by picking up the bills after they dined at a restaurant.
''After the World Cup, we went to a restaurant to eat together, and then she paid the money, this is her first payment. That date was great, I usually pay for it,'' Mikel told CCTV 'Football Night' earlier this week.
Comparing the World Cup and the Chinese Super League, Mikel said : ''Sometimes when you participate in a big competition and return to the club, you will lose the familiar feeling and need to gradually adjust to adapt. I am also actively adjusting.
''The scale of the Super League is getting bigger and bigger, there are many good players joining, and the level of local players is also improving. I hope that it will get better and better.''
Mikel has been left out of the Nigerian squad to face Libya in two AFCON qualifiers next month in Uyo and Sfax as he just returned to action after recovering from injury.
Ifeanyi Emmanuel
Photo Credit : Instagram.com/olga_allegra