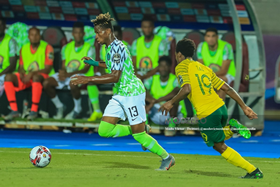 It is no secret that Nigeria super kid Samuel Chukwueze is a summer transfer target for European champions Liverpool on the back of his imperious displays last season for Spanish club Villarreal.
Leicester City, who attempted to sign Chukwueze prior to his transfer to the Yellow Submarine, have reignited their interest in the exciting winger but have to see off competition from The Reds and Spanish teams interested in his signature.
Providing an update on the future of the Super Eagles number 13, the player's  representative, Johnny Ogbah confirmed that there are multiple offers on the table and suggested that the winger could remain at Villarreal next season to continue his development.
''Samuel Chukwueze has many offers before him but he is prioritizing his development as a footballer over monetary gains,'' said Johnny Ogbah to allnigeriasoccer.com.

''So we will take time to consider every offer on its merits before reaching a decision soon.

''He is ready to remain in Villarreal to develop further too.''
The 20-year-old Chukwueze was named Man of the Match in the Super Eagles 2-1 win over South Africa on Wednesday, opening his account for the senior team 27 minutes into the contest.
The Diamond Academy product played a huge role in helping Villarreal avoid relegation last season, scoring 5 goals in 26 La Liga matches.
Ifeanyi Emmanuel