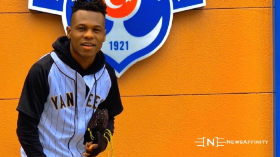 Kasimpasa winger Atto Abbas has cited Lionel Messi as his footballing role model and wants to play like the Barcelona superstar.
The highly-rated youngster, who turns out for the youth team of Kasimpasa, also has the ambition of playing internationally for Nigeria.
'My dream and desire is to play for my country," said Abbas to News Affinity.
"My plans to get to the top is to work hard for what I want to be and make every opportunity very useful. I have played soccer all my life.

"I see myself playing for one of the best teams in Europe in the next five years doing amazing things."
On his role model, he said : "My role model is Messi. I always try to To play like him, his body language, his pattern of play, his behavior with the ball on his foot, I am really working very well to be like him."
Abbas is comfortable playing as a winger, central midfielder and attacking midfielder.
Ifeanyi Emmanuel