...the complete Nigerian football portal
Subscribe
The Bundesliga Is Back After 2 Months!
Published: May 20, 2020 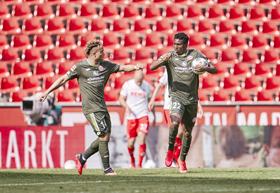 Around two months ago, almost all of the world’s sporting leagues had to be suspended due to the on-going coronavirus pandemic.

The English Premier League, the most-watched sports league in the entire world, was suspended indefinitely on 3rd April 2020 as we buckled up for the fight against coronavirus.

While the fight is definitely not over yet, there is some good news for football fans and punters around the world. Bundesliga, the top league in the German football league system, has started its games again after a break of 2 months.

With the first round of matches conducted over in the last weekend, the Bundesliga has brought back the excitement of football into the hearts of fans again but things are definitely not the same yet.

The Bundesliga matches were held in almost-empty stadiums behind closed doors. In order to ensure that the games were safe for the players and the staff, there were strict protocols that had to be adhered to.

Only 300 people were allowed to enter the stadium, with only 100 being allowed inside the concourse. Everyone that entered the stadium had to go through a temperature check and had to wear masks.

No photos were taken, the usual pre-routine of handshakes or coin-toss was missing, and the best players in Germany lined up to a stadium that made no noise. The atmosphere was as somber as it could get as the games started.

With no crowds to cheer on, the sounds of the games were amplified and you could hear every single pass and every collision between the players. There was no lack of excitement though as the players did their best and were hungry for some real action after 2 months of staying away from the game they love the most.


Another interesting aspect was the goal celebrations. Due to social distancing norms, players had been advised to avoid celebrations with their teammates.
Of course, there were some moments where players just couldn’t resist celebrating, like when Matheus Cunha scored against Hoffenheim but most players followed the rules and we saw some really awkward celebrations during the games.
Lastly, social distancing had to be strictly followed during the game and in the stadium. While it is definitely not possible to eliminate contact between players on the pitch, the substitutes were made to sit at distance from each other and wear masks at all times.


However, even with the new normal state of the game, the matches were exciting and reignited the flame that had been missing for the last few months.
As more and more leagues start opening over the near future, we might just have to get used to the new normal until the coronavirus pandemic is gone for good.
Great news for punters around the world!

The last few months have been hard for sports lovers and punters with the lack of high-quality action. However, with the Bundesliga making a spectacular comeback in these times, the largest betting sites in Nigeria’s traffic numbers are increasing exponentially.

With world-class football slowly but steadily returning to normal, there’s a lot of good news on the horizon for punters all over the world!