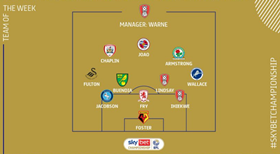 Rotherham United defender Michael Ihiekwe has been included in the official EFL Championship Team of the Week powered by Whoscored.com ratings.
Ihiekwe was at his best at the AESSEAL New York Stadium in South Yorkshire, where he helped goalkeeper Jamal Blackman to keep a clean sheet as the Millers thrashed Sheffield Wednesday on Wednesday night.
Owls pair Moses Odubajo and Fisayo Dele-Bashiru, and former Flying Eagles invitee Freddie Ladapo were also in action.
In a 3-4-3 formation in the Team of the Week, Ihiekwe was the right-sided central defender.
Against Sheffield Wednesday, the Liverpool Academy product made a team-high five clearances, won three aerial duels, made one tackle plus three interceptions and was accurate in 73.7 percent of his passes.
Liverpool-born Ihiekwe has committed his international future to Nigeria and is hoping to get a call-up to the Super Eagles.
The 27-year-old has been described as a defender with robust physical presence, pacy, dominant in the air and descent on the ball.
Ifeanyi Emmanuel
Copyright ANS