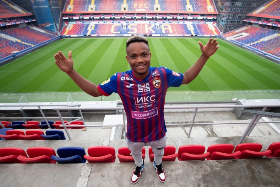 Nigeria international Chidera Ejuke has insisted that his best position on the pitch is the winger role.
Since joining Russian Premier League outfit CSKA Moscow in August, the former SC Heerenveen crowd-pleaser has been deployed as a center forward in at least four matches.
Ejuke's main attributes are his pace and ability to ghost past opponents with ease and the right-footed player has revealed that he would prefer playing as an inverted winger than a center forward.
Speaking to CSKA Moscow's Matchday programme ahead of Thursday's Europa League meeting with Feyenoord Rotterdam, Ejuke said : "That's right, and it's a cool new experience. I really love playing the winger, mostly left, this position suits me very much.
"But with Spartak I came out as a striker and scored a goal. This also develops me as a football player.
"In Heerenveen and in PFC CSKA the style of play is different, it is useful for me to periodically try myself in a new role.
"The coach believes that I have the qualities for a new position, my task is to confirm his opinion."
In 13 outings for the Army Men, Ejuke has scored two goals in Moscow derbies and logged 607 minutes in total.
Igho Kingsley
Copyright ANS