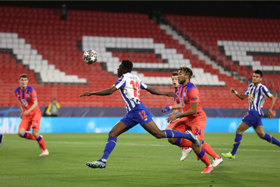 Zaidu Sanusi and his Porto teammates have a lot of work to do in the second leg of their Champions League quarterfinal meeting with Chelsea next week after losing 2-0 to the Premier League side at the Estadio Ramón Sánchez-Pizjuán in Seville on Wednesday night.
Super Eagles left-back Sanusi was reinstated to Porto's starting lineup by manager Sérgio Conceição after he was rested against Santa Clara last weekend.
Thomas Tuchel's side will go into the second leg with a really good advantage after Mason Mount in the first half and Ben Chilwell in the second half got on the scoresheet.
In the 32nd minute, Jorginho picked out the 22-year-old whose clever turn and backheel fooled Zaidu, before firing a right-footed drive into the far corner.
Former Crystal Palace striker Clinton Morrison has refused to blame Sanusi for the first goal conceded by Porto and insisted that goalkeeper Marchesín was at fault.
Shortly after Mount's opener, Morrison said on BBC Radio 5 Live : " It's patient play and even though Porto have a good shape, it's a good ball in by Jorginho into Mason Mount's feet.
"The turn is so sweet, so sharp. The goalkeeper is at fault for me, though."
Due to travel restrictions between the United Kingdom and Portugal, the return leg will also be played at the Estadio Ramón Sánchez-Pizjuán, with Chelsea playing hosts on Tuesday, April 13.
Ifeanyi Emmanuel
Photo Credit : fcporto.pt
Copyright ANS