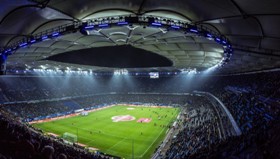 The Champions League final 2020/21 has been moved from Istanbul to Porto. The governing body finalized this decision on the 13th of May after several attempts to host the final in England.
Fans of both Manchester City and Chelsea would be allowed into the stadium to support their teams.
Initially, the Final was slated for Istanbul. Currently, the turkey nation is listed on the red list of the United Kingdom due to covid-19 breakout.
Movement from England to Istanbul is therefore restricted. This created an issue for the governing body because they had plans to allow fans into the stadium.
However, Porto happens to be favoured by being on England’s green list. The match would now be played at the Estadio Do Dragon stadium in Porto, allowing fans to be part of the event.
The UEFA president made a statement regarding this event. He suggested that denying fans and supporters the opportunity to watch the Final was a decision too hard to make.
In his words, Aleksander Ceferin said, “I am delighted we reached a compromise.” Aleksander Ceferin made it clear that the UK's decision to include Turkey in their red list was in good faith and acknowledged that it also created a significant challenge for the governing body.
Moving the location of the final would not be easy but would have to be done. Aleksander also noted that he is hoping that pretty soon, the Final would return to Turkey.
He acknowledges that the Turkish Football Federation has been a massive supporter of the Champions League and is hopeful that the relationship would keep thriving.
Several meetings would have to be fixed, and also new agreement would need to be made. But the body was capable of handling such situations.
This is not the first time that challenges like this have surfaced for the association. The UK government, UEFA, and the Football Association had previously met to discuss taking the final to Wembley, England.
This discussion was not finalized because there was no agreement met for VIPs, Sponsors, and broadcasters, etcetera, that is no quarantine exemption available for them.
This would be the first time in almost a year that football fans and supporters would be allowed to see their teams play live.
The Champions League final should be an exemption. At the very least, following the protocols, fans should be allowed into the stadium.
This is the reason why talks ended about Wembley and were taken elsewhere. Aleksander Ceferin said it was unfair to the fans if they could not watch their teams in the final.
Now fans are going to be present live in the stadium for the final. Twelve thousand fans from both Manchester City and Chelsea would attend the final match on the 29th of May, 2021.
Both teams are currently having discussions regarding ticketing and travel arrangements with UEFA.
Manchester City has a plan to offer fans a travel package from Manchester to Porto. Sales of tickets are slated to begin on the 24th of May, 2021.
However, a conclusion has not been reached regarding the capacity limit at the stadium. This would be the second time, simultaneously, that the UEFA Champions League final would be taking place in Portugal.
Last year in Lisbon, Bayern Munich took the Cup home after beating French giants Paris Saint-Germain in the finals 2019/20.
The fixture is also notable because it’s the first all-English meet in the UCL final since 2008. Chelsea and Man City have also faced each other twice in the past month, with Tuchel’s side emerging victorious.
It remains to be seen whether City will strike third-time lucky or Chelsea get their second UCL trophy.
Kate Richardson, sports betting expert.

For bettors and gamblers, you would want to jump in on this opportunity to predict the winner for the tournament this year.

Sports betting in Zimbabwe is something to look into. You would get top-rated betting sites to get the best offers, odds, and promos for your gambling voyage.

This will be a tough one on the team as they go through one of the rigorous match schedules in May. The FA cup final would be held in Wembley, England.

Fans and supporters would be given a chance to watch the match live for the first time in a long time. However, there would be a required number at the stadium to ensure that every Covid-19 precaution is adhered to.

For Leicester City, they are looking forward to winning the Cup for the first time. It would mean a lot for the club if they win the title.

For Chelsea, winning the FA cup and the Champions League title would be a good foot. It would be a remarkable moment for the London side. Would Chelsea be able to pull this off?

The final would be decided in Wembley in a 90-minute showdown. If required, the game could be extended for 30 minutes of extra time and penalties.

However, an FA cup winner would emerge on the 15th of May. An interesting fact to note is that the FA cup final would be played before the Premier League comes to an end.
The last time this happened was in the 2012/13 season when Wigan beat Manchester City to win the trophy.

Strategies to make a better prediction

Professional bettors bank on a strategy to make their predictions free of bias. It would be risky to place bets when you are not free of particular bias. Now, here are a few strategies that would keep your predictions on point.
●    Study the game carefully
●    Place logical bets that are free of your emotions
●    Bet with verified sportsbooks
●    Always check the injury list; injured players could affect the performance of a team.
You should also read our tips on sports betting in Zimbabwe to enable you confidently and conveniently place bets that would see you smiling to the bank.