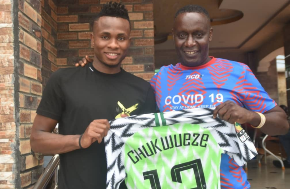 Samuel Chukwueze may quit Villarreal in the summer transfer window with reigning French champions Lille now the latest club to join the chase to sign him.
This much was disclosed by former Super Eagles midfielder, Ifeanyi Ekwueme during an exclusive chat with this reporter.
According to him, representatives of the Diamond Football Academy product have held talks with officials of Lille FC and is in line for a summer record- breaking transfer  from Villarreal to Les Dogues.

With this latest development, speculations making the rounds recently which have seen Chukwueze linked to plethora of clubs including European heavyweights Liverpool,  Chelsea, Arsenal, West Ham  among others could be put to an end.

"Chukwueze has so far done well for himself and he is open to new challenges provided the offer is right for him," Ekwueme who is a close pal to Chukwueze's mentor and CEO of Super Stars Football Academy, Uyo Hon Victor Apugo said.

"Chukwueze hosted me in Umuahia about few weeks ago and to the best of my knowledge I know he is wanted by a lot of clubs in Europe.

"Though he is happy and satisfied with what he has so far achieved at Villarreal, he is hungry for more and would like to seek fresh challenges elsewhere.

"As a matter of fact, discussion is already in progress. If it goes according to plan be rest assured that he may be joining one of the clubs this summer and it could likely be Lille FC. They have been in the forefront to get him since the past few seasons.

"If what I gathered about the deal should be anything to go by, it will be an excellent signing for him.

"It's unfortunate that the injury he sustained against Arsenal in the semi-final of the Europa Cup stopped him from featuring in the final.

"That not withstanding, his over all superb performance at the tournament as well as La Liga further helped to improve his market value in European football."

Chukwueze,22, has signed a bumper deal  that will keep him with the Yellow Submarine till 2023 with a renewed 100 million euros release clause but it remains to be seen if Lille can meet his asking price considering the global pandemic that has crippled the finances of even the major European clubs.

He finished a remarkable season with a Europa League medal around his neck and managed to score five goals while registering eight assists in all competitions for Villarreal despite being plagued by injuries.


The highly-rated winger could spearhead Lille's attack next season alongside Burak Yilmaz as they return to the Champions League having missed out in the previous campaign.
The Super Eagles star would be the fourth Nigerian to play for Lille if the deal eventually scales through having had ex-Nigeria international Peter Odemwingie, Vincent Enyeama and Victor Osimhen on their payroll.