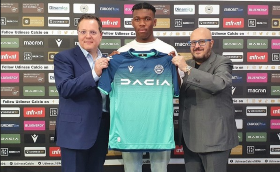 Italian Serie A club Udinese Calcio have bolstered their squad ahead of the 2021-2022 season with the signing of Nigeria-eligible defender Destiny Udogie, informs the official website of the Bianconeri.
The 2002-born left-back arrives at Udinese on a season-long loan from Hellas Verona, with an option to buy inserted into the contract.
Regarded as one of the top young talents in Italy, Udogie has represented his country of birth at U16, U17, U18, U19 and U20 levels.
He was an influential member of Italy's squad to the 2019 U17 World Cup, starting four of their five matches during the tournament in Brazil with a goal and assist to his name.
Predominantly a fullback, he is comfortable playing as a left winger, defensive midfielder and central midfielder.
Last season, he appeared in six Serie A matches, including games against the two Milan clubs, Napoli and Atalanta.
Udogie will be aiming to follow in the footsteps of Isaac Success, Odion Ighalo, William Troost-Ekong and Uche Agbo who earned moves to Watford after initially signing for the Little Zebras.
Ifeanyi Emmanuel
Photo Credit : udinese.it
Copyright ANS