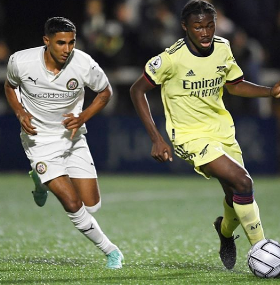 According to Jeorge Bird, former Arsenal captain Per Mertesacker was in attendance as the Gunners U18s defeated Southern League Premier Division South side Hendon FC 3-1 in a pre-season friendly at Silver Jubilee on Friday night.
Promising Nigeria-eligible striker signed on scholarship terms from Manchester City, Henry Timi-Davies was in the Gunners matchday squad but started on the bench.
Amani Richards gave Arsenal the lead before Charles Sagoe doubled the advantage before half-time.
Arsenal U18s coach made three changes at the break, one of which saw Timi-Davies replace Richards.
An absolute belter of a free-kick from Matheus Roberts made it 3-0 before Hamza Semakula netted a consolation for the home team.
A physical striker, Timi-Davies, who has caught the eye in pre-season, made his U23 debut away to Bromley on July 27.
The hugely talented Anglo-Nigerian youngster will sign a three-year professional contract at Arsenal in the coming months.
Ifeanyi Emmanuel
Photo Credit : arsenal.com
Copyright ANS