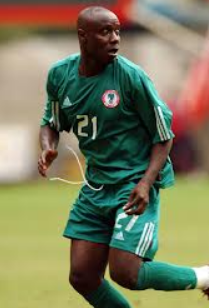 Ex Nigeria international, Ifeanyi Ekwueme has responded to Heartland's  claim that he failed to fulfill contractual agreement with them.
Ekwueme last week made good his promise to drag the crisis ridden club to Owerri High Court over alleged N21.8 million debt for supply of kits.

A statement issued by Heartland acting General Manager, Promise Nwachukwu, however insists the club management are not owing her former Sporting Director a dime.
"Ifeanyi Ekwueme failed to deliver on his obligation to the club," part of the statement read.
While reacting to Heartland's statement, the erstwhile Super Eagles' star dismissed it with a wave of the hand saying he is not ready to join words with the club anymore.
"Ask them where they got the kits they played with last season from. Did they steal it?" he asked angrily.

Ekwueme noted that the press statement was shameful and labelled officials of the Naze Millionaires now nicknamed Owerri Thousandnaires blatant liars.
Said he:"Don't mind them. They know what they are doing. They are all blatant liars. That statement was an empty one, frivolous, baseless and lack merits and should be treated with all contempt that it deserves.
"The case is already in court so it's needless exchanging words with them in the pages of the newspapers and social media. I am going to expose all of them one by one. We will open can of worms.

"In fact, I don't want to join words with them anymore.They should not worry, they will hear from me very well when we get there."
When asked why he quit his job as Heartland's Sporting Director, Ekwueme submitted:"I quit the job after I noticed that those working around me were not pure professionals. I can beat my chest that I am the only club official who gave the players and officials loan from my pocket, which some of them did not return. I had to do it because I have the interest of the club at heart and wanted it to move forward.
" Apart from the jerseys they bought, I gave the players and officials free training kits as well as a lot of promotional items because Heartland is a club I love from the bottom of my heart.
" But when I noticed that things were not going well, I stepped aside. Like the popular pidgin slang says, "Monkey no go dey work and  Baboon go dey chop." Perhaps they thought I was a foolish Father  Christmas.
"Nobody is ready to source for funds from corporate bodies like others do to run their clubs. Instead everybody is waiting for Governor Hope Uzodinma to release money and how they will plan to share it.
"As a result of that, I made up my mind to leave because I don't want to be part of the looting. It's a big shame that the same people who came to my house 12 midnight to beg me for jerseys are the same group of people telling silly lies.
"Let them bury their faces in shame and wait for me. We will cross the bridge when we get to it."
It would be recalled that Heartland escaped relegation last season in an embarrassing circumstance, with a section of the  fans calling for the immediate sack of the embattled club acting General Manager, Promise Nwachukwu due to incompetence even as they clamour for disbandment of the club or recall of suspended General Manager, Ifeanyi Chukwudi to  help steady the sinking ship.
Ephraim Nwosu