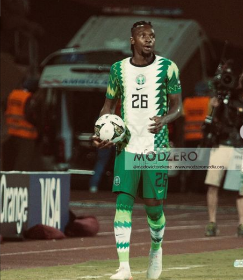 Orlando Pirates central defender Olisa Ndah admits he is benefiting from words of wisdom from former Chelsea star Kenneth Omeruo.
The former Nigeria U23 international became the third player to make his competitive debut under Augustine Eguavoen at the 2021 Africa Cup of Nations, after Sadiq Umar and Kelechi Nwakali when he replaced Tyronne Ebuehi in the 76th minute of the 2-0 win over Guinea-Bissau on Wednesday night.
Ndah revealed that the experienced Omeruo, who is participating in his third AFCON, has taken him under his wing.
Quizzed on how much he has learned from his senior colleagues in defence, Ndah said at the end of training on Thursday : "I've learned a lot. They have been so supportive especially Kenneth Omeruo.
"He's given me a lot of talks and confidence. He's a good man and I'm happy to be here."
Ndah says he is glad to be given the opportunity to make his Africa Cup of Nations debut and believes that the experience he has gained will help enhance his career when he returns to Orlando Pirates.
"It's a big boost to my career. This is my first time in the Super Eagles, my first Africa Cup of Nations and my first game so it's a big boost and I pray it keeps coming.

"Hopefully I keep doing my best and I hope that everything works out well."
Looking ahead to the round of sixteen clash on Sunday, Ndah is confident that the Super Eagles will not fizzle out after a bright start to their Africa Cup of Nations campaign.
"They should expect a good game. We have started working again for the upcoming game, we don't know who our opponent is yet.
"We have the confidence and quality we need, I know it's going to help us."
Ndah was handed a shock call-up to the Super Eagles following the appointment of Augustine Eguavoen as interim manager last month.
Ifeanyi Emmanuel
Copyright ANS