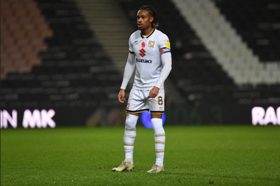 Huddersfield Town are reportedly in pole position for the signature of talented 2015 Nigeria U15 invitee David Kasumu.

The Terriers are looking to bolster their squad with the signing of a midfielder after missing out on promotion to the Premier League in last season's playoff final.

England youth international of Nigerian descent Faustino Anjorin has returned to Chelsea after spending the second half of last season at the John Smith's Stadium.

MK Dons have made a contract offer to Kasumu but nothing has been signed as of yesterday, meaning he is now a free agent.

Tom Coleman, sports writer at the WalesOnline, has reported that the Nigerian is closing in on a move to Huddersfield Town and added that a move to Swansea City is not on the cards.

Think we already knew this, but doesn't seem like David Kasumu will be heading to Swansea. Told he's closing in on a move Huddersfield #Swans #HTAFC

Kasumu is a product of the MK Dons Academy, rising through the ranks before making his senior debut in a Carabao Cup fixture against Newport County while still a schoolboy.