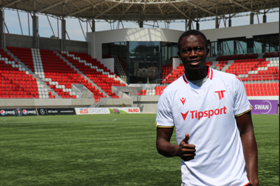 Nigerian midfielder Adewale Oladoye has signed for Slovakian side AS Trencin.

AS Trencin confirmed this on their official Twitter page on Wednesday, welcoming the 20-year-old from 2015 Belgian Pro League champions KAA Gent.

Adewale becomes the third Nigerian in recent years to switch between both clubs after Reuben Yem and Philip Azango.

Adewale Oladoye is another reinforcement of the @astrencin in the summer preparation period. The 20-year-old 🇳🇬 midfielder arrives from the Belgian side @KAAGent #Welcome and #goodluck 🤍❤️ pic.twitter.com/1BP7Gkw49U

The young Nigerian amassed 185 minutes of football in ten appearances for the Buffalos. His only goal for Gent came in the UEFA Conference League qualifiers against Rigas FC in August 2021.

AS Trencin have snapped up the youngster as they look to build on their seventh place finish in the Slovak highest division last season.

KAA Gent have also confirmed that the Nigerian is moving on to pastures new and wished him all the success in his career at AS Trencin.

Nigeria internationals Reuben Gabriel, Moses Simon, Samuel Kalu, Uche Nwofor and Rabiu Ibrahim have worn the colours of AS Trencin in the past.