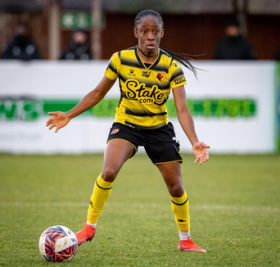 Through their official website, Watford have announced that 2021 Super Falcons invitee Adekite Fatuga-Dada has put pen to paper on a new contract with the Golden Girls ahead of the FA Women's National League Southern Division season.

Fatuga-Dada has proved her commitment to Watford by extending her contract despite the club's relegation to the third tier of English football at the end of last season.

She started her senior career at the Hornets as an eighteen-year-old in 2015.

The 25-year-old, who is the longest-serving player in the Watford squad, has made over one hundred appearances in a Watford shirt making her senior debut against Doncaster Rovers Belles in August 2015.

Fatuga-Dada initially joined Watford at the age of eleven through the Watford Community Sports & Education Trust as a youngster, before a brief spell at Arsenal, with whom she won the FA Youth Cup.

She can play on the wing or in a central role and is known for her playmaking abilities.