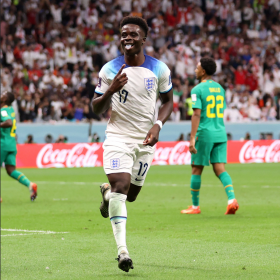 In what was a battle of the Lions, the Three Lions of England devoured the Teranga Lions of Senegal to advance to the Quarterfinals of the 2022 FIFA World Cup.

African champions, Senegal suffered a 3-0 loss to the Gareth Southgate led side in a Round of 16 clash of the 2022 FIFA World Cup played at the Al Bayt Stadium in AI Khor.

Goals from Jordan Henderson, Harry Kane and Bukayo Saka were able to propel England to the last eight.

Following their comprehensive victory, the Europeans will face defending champions France in the quarterfinals of the FIFA World Cup on Saturday.

Arsenal star of Nigerian descent Bukayo Saka scored England's third goal of the night and in the process made history.

The 21-year-old also became the first Arsenal player to score for England's senior team in a knockout game at any major tournament.

Bukayo Saka is the first Arsenal player to score a goal in a men's major tournament knockout stage game for England.

Saka's impressive performance has set tongues wagging, with many football lovers in Nigeria taking turns at lavishing the England winger with praise.

B.Saka is more popular than wizkid.
No be lie 👌🏽👌🏽

Bukayo Saka is the future not just for Arsenal, but also for England

You do well starboy ⭐️

Saka for the Golden boot🙌

What a goal from BUKAYO SAKA.

The audacity and awareness to chip the ball above the onrushing Mendy.

Superb finish by Saka.
England have actually been brilliant.