Subscribe
MAURICE EDU Wants To Remain With Rangers
Published: May 14, 2012 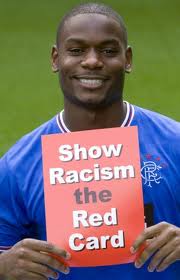 USA international with Nigeria roots Maurice Edu wants the players at Rangers to remain at the club despite a dark cloud surrounding the future of the Glasgow giants.

With only one year left on his current deal, Edu is optimistic that Rangers can wrestle the title from Celtic if the players don't jump ship.

''We want to come back next year, really push on and compete and win our title back.

"It would be good if we can kick on now. We have finished the season strongly and we've had some good results in the last few games.

"Hopefully the fans can go into the summer with something to smile about and when all is said and done, hopefully we can keep this team together,'' Edu was quoted as saying by the official website, rangers.co.uk.

Super Eagle Sone Aluko, who had a brilliant season, has stated that he would love to remain in Glasgow.