...the complete Nigerian football portal
Subscribe
JUSTICE ERHENEDE: It Was The Best Feeling Ever
Published: November 22, 2012 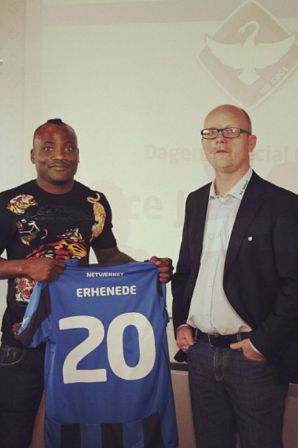 Justice John Erhenede was the hero for HB Koge last weekend in their 1 - 0 win at home to Vejle-Kolding. The 26 - year - old had been battling with injury before he was snapped up by HB Koge in late October.

''I had been injured for five months, just signed recently for HB Koge. Scoring against my former club was the best feeling ever but I can't celebrate it because I had a good relationship with the club before I left,'' says Erhenede to allnigeriasoccer.com.

Erhenede further disclosed that he rejected the advances of three teams in the Danish first division before signing a short term contract with HB Koge.

''Hobro IK told me to continue with them after I returned from  injury, but I wanted a new team. I had the option of joining three teams in the first division, but finally I settled for HB Koge.I am still in Denmark because the right offer hasn't come for me outside the country.''