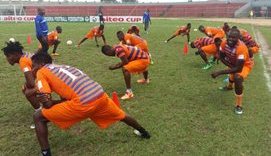 When news emanated that the emergence of the League Management Company was to prevent the almost total collapse of the Nigerian Premier League which was plagued by legal , contractual , administrative and financial impediments, a large number of soccer loving Nigerians expressed happiness, some expressed optimism, others were on the fence just waiting to see a transformation or maybe otherwise.

The enforcement and implementation of laws will finally be hastened whenever issues come up was the anthem on the mouth and in the minds of some people, who believed if even there will be serious issues, it will not be contractual, legal or financial impediments .

Fast forward to 2018, there is a framework which was designed to guide the league and cut to sizes the excesses of clubs, administrators or individuals, even though the new league is still operating using the old framework as the new framework has not been made public with five games into the new season.

Though it is pertinent and worthy of mention that the LMC has to some extent added value to the league, sponsors are on ground, games were on Supersport last season and on NTA this season, there was a tour to Spain at some point, all of which is laudable, at the same time, the LMC has failed in flying colours when it comes to implementing and enforcing laws.

In the first part of this article, the details of how sunshine stars of Akure unjustly treated the clients of Mr Endurance Ogbemudia,  Sopuruchi Dimgba and Ojo Mine, who at some point was evicted from his apartment were extensively discussed.

The initial promise by the LMC was that the money due to the players will be withheld from any distribution of money due to Sunshine Stars.

The League Management company on the 9th of January 2018 refused Sunshine stars request to register new players in accordance with the combined provisions of Rule A8.3.3- A8.3.7 and B9.45 of the framework and rules of the Nigeria professional football league and the Article 1.4 section F.02 and F 03 under the financial criteria of the club licensing regulations of the Nigeria football federation.

The refusal is on ground that Sunshine Stars failed to show proof that there are no payables overdue towards employees and other clubs.

Obviously, when you read, you get deceived that the LMC would stand its ground, but yet again, "the toothless bulldog has barked but will never bite".

Is it not so obvious now that there are Sacred Cows in the League?

It was gathered that Tayo Adebogun, Jide Fatokun, Chigozie Obasi, Sunday Abe, Moses Ocheije, Sunday Emmanuel, Adebayo Adigun and Nwakanma Ikedinachi and three others were recruited by the Ondo state sponsored side.

The new players got their squad numbers and were ready for action.

One would never believe a governing body of LMC's calibre would be scared of just one club to implement the laws they made as it is shameful, but subsequently, these players got involved for the team immediately the league started.

Are you not surprised? Could it be that unregistered players are involved in league matches in a so called professional League?

So many questions begging for answers and the Leadership of the LMC has seen nothing wrong in its own incompetence.

Sunday Abe, Adebayo Adigun, Jide Fatokun, just to mention a few of the new players have been involved in league matches this season, Unregistered? Maybe, Maybe not, Only the "Toothless Bulldog" can shed more light.

Endurance Ogbemudia confirmed that his clients  Stanley Dimgba and Ojo Mine who are being owed two million eight hundred and twenty thousand Naira each have not been paid, and Sunshine Stars, (The new Sacred Cow) is walking freely in town.

Which way Nigerians? This body should put an end to the sufferings of players, the LMC should ensure the actors are not working without getting paid, but reverse is the case.

LMC has once again proven to be a "Toothless Bulldog" barking day and night without biting, our league is dwindling, and those that started after us have left us behind.