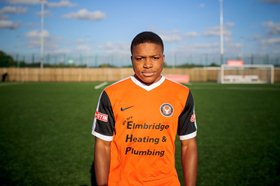 Reports from England indicate a plethora of clubs, including Premier League teams, are interested in signing non-league striker Ronald Sobowale.
The Daily Mail is reporting that the 21-year-old is moving closer to turning professional, with the likes of Watford, Cardiff, Reading and Sheffield Wednesday all keeping tabs on him.
Sobowale's father is the brother of Bayern Munich star David Alaba's father but unlike the Austria international he was born in London and remains eligible to represent Nigeria at international level.
He played on the same Chelsea youth team as Dominic Solanke and Tammy Abraham but was not offered a scholarship due to his size.
In November, he trialed at League One side Barnsley and was earlier linked with a move to Bristol City.
Sobowale is currently on the books of Walton Casuals, whom he joined in the summer of 2018, and lists Carshalton Athletic and Molesey FC among his former employers.
Ifeanyi Emmanuel
Photo Credit : waltoncasuals.co.uk