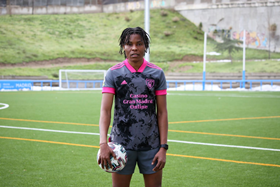 Nigeria international Osinachi Ohale has returned to the Spanish Primera Division after signing a deal with Madrid CFF, informs the club through their official website.
The no-nonsense center back was one of the important players for Real Madrid Femenino last season, making fifteen appearances in the league and scoring two goals.
Ohale found game time hard to come by in her brief stint with AS Roma and departs the Italian top-flight club without making her full debut in the Serie A Women.
A four-time AWCON winner, the 29-year-old began her career in her homeland with Rivers Angels in 2008, followed by spells at Delta Queens and Houston Dash, before returning for a second spell with Rivers Angels in 2015.
She later moved to Sweden, where she played for Vittsjö GIK and Växjö DFF.
Nigeria internationals Rita Chikwelu and Chidinma Okeke, and 2018 U17 World Cup winner of Nigerian descent Mabel Okoye are on the books of Madrid CFF.
After 14 games in the division, Madrid CFF are seventh in the table with 25 points.
Ifeanyi Emmanuel
Photo Credit : madridcff.com
Copyright ANS