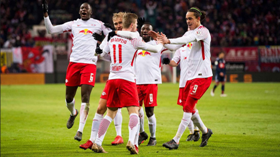 The rise of RasenBallsport Leipzig from the entrance of Red Bull to today
German football club RB Leipzig
The German football club RB Leipzig (or RasenBallsport Leipzig) is today a strong contender both in the German Bundesliga as well as in Champions League.
The road from creation of the club to where they are today has gone amazingly fast, the club was founded in 2009 and less than ten years later they qualified for Champions League.
Red Bull is behind the success
The reason they have become such a strong club in such a short time is because of the energy drink company Red Bull.
In 2009 the owner of Red Bull, Dietrich Mateschitz, bought the division 5 club SSV Markranstädt and then renamed it to RB Leipzig, with the ambition to climb all the way up to Bundesliga in only five years.
It did not go as fast as Mateschitz hoped, but in 2016, only 7 years after the creation of the club, RB Leipzig managed to reach Bundesliga.
The Bundesliga performances
Already in their first season in Bundesliga RB Leipzig reached a 2nd place and thereby qualified for Champions League.
The following season they only managed to reach a 6th place but the season 2018/2019 and 2019/2020 they finished 3rd, both years qualifying once again for Champions League.
The dream of winning Bundesliga still lives on but to reach the quality of Bayern München and beating them over a whole season is still a big step they have not managed to take.
RB Leipzig in Champions League
RB Leipzig first appeared in Champions League 2017/2018 but it became somewhat of a disappointment as they were knocked out in the group stage.
Finishing third they got a spot in the knockout rounds in Europa League instead and managed to reach the quarter finals there, only to be knocked out by Marseille.
The second session in 2019/2020 was a bigger success though. After winning their group and only losing one game against Lyon at home they qualified for the next stage and quite easily won against Tottenham with a 4-0 win in total.
Because of the Corona virus the tournament was halted and when it started up again, they had to face Atlético Madrid in the quarter finals.
Atlético Madrid where big favorites but RB Leipzig proved how good team they have become and beat them with 2-1 in total and faced Paris Saint-Germain in the semifinals.
Unfortunately for RB Leipzig Paris Saint-Germain were a too difficult team to pass (3-0 loss in total) but reaching the semifinals in Champions League by an 11 year old club is surely impressing.
Notable players in RB Leipzig
The most notable player ever playing in RB Leipzig is probably Timo Werner (today playing in Chelsea).
In his four years in Bundesliga he has finished top 10 every year in the top scorer list, and the season 2019/2020 he finished as the second best goal scorer in Bundesliga, scoring 28 goals (six goals behind impossible to beat Robert Lewandowski).
Other important players are Hungarian defender (and captain) Willi Orban, Swedish Emil Forsberg, Austrian Marcel Sabitzer, French Christopher Nkunku and German international team defenders Lukas Klostermann and Marcel Halstenberg just to name a few.
Photo Credit : dierotenbullen.com