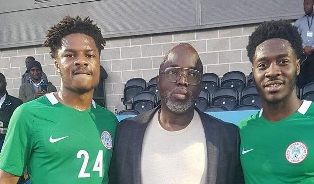 SCORENigeria gathered the 20-year-old Aina has been left out of the week-long training camp in France because his club Chelsea are involved in the FA Cup final against Arsenal, which is fixed for May 27.

Like clubmate Victor Moses, he will therefore miss the friendly against the French island of Corsica now fixed for May 26, a day to the cup final.

Incidentally, Victor Moses also switched his international allegiance from England to Nigeria in 2012 and a year later, he inspired Nigeria to win a third AFCON crown in South Africa.

Ola Aina, whose full names are Temitayo Olufisayo Olaoluwa Aina, has made a big impression on Rohr when he trained with the rest of the squad in London in March.