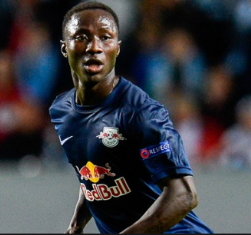 Liverpool are considering another bid for RB Leipzig midfielder Naby Keita, according to reports.

The Liverpool Echo says Liverpool must decide whether to table a third offer in excess of £70m (approximately N32.6 billion) having failed with bids of £57m and then £66m to lure the Guinea international to Anfield in the summer transfer window.

For weeks, the Reds have been trying to sign the highly-rated 22-year-old without success, and he could break the transfer record for an African player if the deal goes through.

RB Leipzig have argued that they don't want to sell Keita because it will give out the wrong signals to the fans as well as other players that are being coveted, including Timo Werner.

Liverpool broke their own transfer record by paying AS Roma £36.9 million for the services of Egypt international Mohamed Salah, while Nigerian striker Dominic Solanke joined from Chelsea.

Keita is under contract with the Bundesliga club until the summer of 2020.