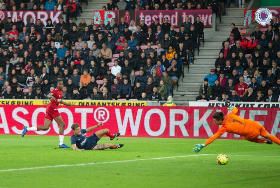 Liverpool legend Steven Gerrard reserved special praise for Joe Aribo following Rangers' impressive 4-2 road win against FC Midtjyland in the Europa League third qualifying round on Thursday evening.
The Scottish Premiership giants led 3-0 after 56 minutes thanks to goals from Alfredo Morelos, Aribo and Nikola Katic, before Nigerian midfielder Frank Onyeka reduced the deficit in the 58th minute.
The former Charlton Athletic star continues to show what he's capable of since his arrival at Ibrox, with his strike against FC Midtjyland his third goal in Rangers colors from five appearances in the Europa League qualifiers.
''I have nothing but praise for my players. This is a difficult opposition who have good players,'' said Gerrard to Rangers TV

''They are very big in profile and you can see their set-piece threat. They have got good players and technicians who can hurt you.

''I thought Jon Flanagan for his first start was immense. The two centre-backs were fantastic again and Joe Aribo again gets an unbelievable goal.''
London-born Aribo is willing to represent the Super Eagles if he is approached by the Nigeria Football Federation.
Ifeanyi Emmanuel
Photo Credit : rangers.co.uk