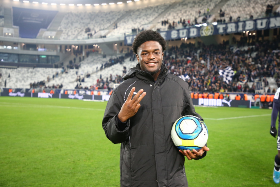 Nigeria manager Gernot Rohr has given tips to Bordeaux pair Samuel Kalu and Josh Maja on how to reach their highest potential.
The two players, who are under the age of 23, have been advised to work hard in training and build up their self confidence.
Maja struggled to adapt to the French Ligue 1 in the second half of last season after arriving from third-tier Sunderland in England, but has been one of the shining lights for Bordeaux this season, having a hand in 10 goals (7 goals, 3 assists) in 19 matches across all competitions.
As for Kalu, he is no longer in the good books of manager Paulo Sousa so much so that he is being linked with a departure from the club before the close of the January transfer window.
In quotes carried by girondins33.com citing RIG, 90.7 FM, Rohr said when asked what the two players are missing to reach their highest level : " I would say work and confidence . Work is training, everyday life, but of course matches too. Confidence in themselves is important, but also the confidence of the staff.
"When a player feels that a coach appreciates him, that he wants to help him, that he counts on him, etc, it gives him a boost.
"For young players who are a little bit sensitive, mentally fragile, it is very important to have this feeling.
"I hope they have it in the Girondins, they need it. The competition is tough, of course, but these players are the future and it's worth it."
Ifeanyi Emmanuel