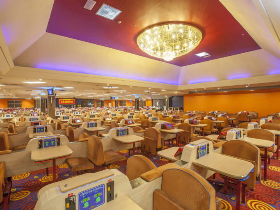 Rudimentary forms of Bingo have been around since the very beginning of human civilisation, however it is only actually in the last couple of hundred years that it was refined and marketed as Bingo.

In fact, before Edwin S. Lowe, an American opportunist, devised the modern Bingo score card, it was a game that was only really played in schools and fetes.

However, as soon as he made the breakthrough its popularity skyrocketed.

Nowadays Bingo is played in a huge variety of different places, from primary schools to care homes, all the way through to nightclubs.

One of the main reasons why Bingo underwent such a huge popularity surge in the early 20th Century was the introduction of cash prizes, however these days there are so many more rewards than just money.

Okay granted, branded goodies aren’t the funniest of Bingo rewards, however that does all depend on what the brand is after all.

In the 21st Century we can see far more Bingo halls giving out prizes in the form of different merchandise, whether from the Bingo hall itself or their many partners.

So, need a new t-shirt or rucksack? Why don’t you get on down to your local Bingo hall…

Over the last decade there has been a noticeable rise in Bingo nights that happen in nightclubs, and at these a large portion of the Bingo rewards end up being something to do with alcoholic beverages.

Now, if there is anything us humans like more than money, it is drinking, so this is a pretty good reward to have.

Prizes can range from a shot to a yard of ale, and you will often find that they come with some kind of action alongside them also.

For example, at many Bingo club nights the overall winner has to end up downing a whole pint in one go. Good old fashioned fun!

A forfeit or dare

These Bingo club nights are generally aimed at students and young people, something that means the organisers can get as wacky as possible with their Bingo rewards.

At many of these places they come in the shape of a forfeit or dare, with the rest of the crowd often deciding what it is.

As you can probably imagine, there is a whole load of comic potential here, with people being able to be dared to do a whole range of hilarious things.

Yeah you heard that one right, expensive lingerie can also be a Bingo reward if you are lucky enough.

In fact, the popular shop Ann Summers actually had their own online Bingo site for a while, on which you could win a variety of things from their catalogue…

And you thought lingerie was ridiculous… One woman in rural America ended up winning a whole milking cow during a game of Bingo.

Could it be the best prize ever to be won by somebody gambling?