The winner of the Norwegian hockey championship Fjordkraft-ligaen 2022/2023: preview 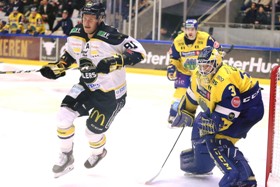 The regular season of the current elite hockey championship in Norway started in September 2022 and will end at the end of February 2023. After that, eight of the 10 teams will form the quarter-final playoff pairs. The teams that took the last two places will go down in class.

The bookmakers consider four clubs to be the main contenders for the championship, namely: Stavanger Oilers, Storhamar, Frisk-Asker and Valerenga. It is these teams that have the most chances to win the championship. Bets on this event are accepted by mostbet.com.

The Stavanger Oilers have won the league title six times in the last 11 seasons. In the current regular championship, Todd Bjorkstrand's wards did not differ in stability. After 23 games played, the White-Black-Yellows were in fifth place with 14 wins and nine losses (seven in regular time). In the playoffs, the "oilmen" are guaranteed to break through. However, winning the trophy will not be easy.

The "oilmen" have a decent squad, which consists mainly of Norwegians. However, there are three Canadians and an American in the starting line. These performers have a lot of experience. In the playoffs, it will not be easy for Dennis Levold Swaim and partners, but the Stavanger hockey players may well aim at the title.

The club from the city of Hamar did not look very stable in the regular season. By the 23rd round, Petter Thoresen's team was in sixth place, having won 14 matches (11 in regular time) and suffered nine defeats. The fight for high places in the regular championship will be stubborn. At the same time, Storhamar is unlikely to fall out of the six.

Last season, the "yellow-blue-whites" played in the final, where they lost to the Stavanger Oilers. The composition of the inhabitants of the "Hamar Olympic Amphitheater" is decent. So Storhamar may well compete for the eighth league title in club history.

The team of Jan Osland won the "gold" of the Fjordkraft-ligaen of the 2020/2021 season. This year, the Asker Tigers looked pretty good in the regular season. After 23 rounds, the Orange-Black-White-Reds were in fourth place, ahead of fifth Stavanger in additional indicators. At the same time, Hampus Gustafsson and partners were only one point behind the third Stjernen. In general, the team from Asker will try to aim for medals of the highest standard at the end of the championship.

Frisk-Asker does not have extremely famous performers, but in terms of gameplay it looks convincing. So the Tigers are counting on the prospect of competing for a second league title over the past three years.

Since 2000, Valerenga has won eight championship titles. No one has won more trophies in the Norwegian championship during this period of time. Representatives of Oslo looked powerful in the regular championship and after 23 games played, they were on the second line. Only Sparta Sarpsborg is located above. The wards of Fredrik Anderson had 15 wins and eight losses.

In the regular season, the Blue-Reds had one of the strongest attacks and a fairly reliable defense. If the capital's hockey players also continue to act in the playoffs, they may well aim for gold medals. At the same time, in the relegation battles, it will be quite difficult for the club from Oslo to impose a fight on Stavanger Oilers or Storhamar.

Due to the powerful composition of the Stavanger Oilers has the best chance of winning the championship title. Valerenga demonstrates quality hockey, and even despite the fact that the Blue-Reds are inferior to Storhamar and Frisk-Asker in terms of coefficients, hockey players from Oslo can get around these opponents. The teams from Hamar and Askar will try to perform powerfully, but reaching the semi-finals, with a high probability, will already be a good achievement for the "yellow-blue-white" and "orange-black-red-white".