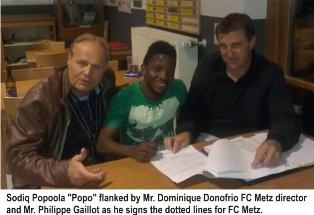 Allnigeriasoccer.com had exclusively reported last September that Metz had offered the teenager a two - year deal.

Last year, the Flying Eagles invitee tested with Standard Liege but was not offered a contract.

36 Lion boss, Gafar Liameed says Standard Liege made a mistake by not signing the attacking midfielder.

He told DHnet.be: ''I think with Saliu, Standard made the same mistake as Brugge did to (Imoh)  Ezekiel.

''Saliu is a terrific play-maker I can tell you that if he had been there at Anderlecht on Sunday, Standard perhaps would not have lost.

''Unfortunately, there has not been a chance. Too bad Marc Van Osselaer (former head of scouting) was no longer in office.

''It was he who, last season, insisted Imoh remains in Standard.''

'Popo' is only 161cm but is regarded as the smartest attacking midfielder that will ever come out of Nigeria in this era.